What Support Has Meant To Me

Life without support makes you sicker, and more disabled, writes Sue Marsh, author of Diary of a Benefit Scrounger, and founder of the Spartacus Network.

Just over a month ago, the DWP finally decided that they'd made a mistake and I DID qualify for DLA after all.

It had been 18 months since my original claim. It took 9 months to reject it initially, then a month or two for them to "reconsider" (they still rejected it) then another 6 or 7 months waiting for a tribunal.

As we waited, my family was poor. I mean really POOR. In fact, much like the UK, we were in deficit every month. There was not enough money to go around. We still had to pay our rent - everyone needs a roof over their heads, though we sold our home and lived off the profits for a while. Then we moved to a smaller flat from a house to save money, when our savings had all gone. It wasn't enough.

We still had to pay heating and lighting bills and we had to buy food. Because of my crohn's disease, we had to buy good food. No £50-for-a-fortnight Iceland runs for me. Nope, I had to somehow buy lots of fresh fruit and veg, good quality meat and supplements with no money. I always felt guilty.

Damn but I was resourceful! I went to good butchers and flirted them into saving me all the old bones from chickens and lamb. I made stews and ragouts and soups from the bits no-one else wanted. I made a chicken last three days. I only bought the slightly mushy veg going cheap at the end of the day. I could spot a yellow "reduced" sticker from 50 paces.

Every time I put the heating on I felt guilty.

We only took the kids to do free things.

We couldn't afford presents when the other kids had birthday parties.

My Mum bailed us out at the end of most months.

Everything we owned had either broken or gotten too small or had holes in.

I had never bought new clothes for my kids. Every last item they possessed - including shoes - were hand-me-downs.

But you know, I don't list these very few things in an everyday life for pity, it doesn't work like that. You don't realise how poor you are. I mean, you know you're poor, but you stop realising how much of your day is taken up with just managing poverty.

So, last month, we had run out of options. We were in debt. We had no more credit. We'd borrowed money from family and couldn't pay it back. We'd missed a rent payment. In short, we were screwed.

Then, suddenly, out of the blue, the nice lady from the DWP phoned, and it had all been a "mistake".

But it didn't end there. Not only were we told that I would be getting the higher rates of both the care and mobility components of DLA, but everywhere I turned, money mushrooms sprang up in my bank account like the night after rain.

First, the people at the council wrote to tell me I was entitled to housing benefit. They too backdated it to the date of my original DLA claim.

Then the tax credit people wrote to say I was entitled to a disability element. That was backdated too.

The DVLA wrote and told me I could get free tax for my car - which was just as well as, unable to pay, we were just about to SORN it, leaving me even more isolated.

There are probably more things, but it all got a bit jumbled.

Ever since, cautiously, Dave and I have started to realise that life is a bit different. I can get the food I need. I bought a comfy, marshmallow bed - after all, I spend a lot of time in it! We went to London for a hospital appointment and paid for transport without feeling guilty. When I've been exhausted, we've got prepared food or take-away. We bought the kids school shoes. We fixed our curtains. We got a freezer (I only had an ice box before) we replaced the microwave that was condemned and rusty.

And here's the point, my life changed. I had been so worried all the time, there had seemed no way out. The constant pressure and fear had weighed me down without me even noticing. It was just life. But as soon as we got the help we needed, the help we had always qualified for, the pressure lifted. When people asked how I was, I said "fine" even though my symptoms were just the same. I did some "nice things" and started to get a bit of strength back. I felt less ill, just because I was less worried.

Stay at home, don't be seen having fun - there may be a Daily Mail lens trained on you. For goodness sake don't have a big TV or a nice car. How dare you go out for dinner or drinks? How dare you spend MY hard earned tax money on cake? A HOLIDAY??? You're kidding, right?

But this is what is so wrong! First ESA, and soon PIP are designed for the incapable. They are designed to MAKE you incapable. Stay in bed, give up fighting, become totally bedbound and you will qualify - fight, and struggle to live the best life you can and you won't. You mustn't just be incapable of walking, you must be incapable of mobilising at all. Don't get out and about with aids if you have limited vision! Don't bend or stretch when you can. Don't get any exercise to keep you going for longer.

It is an utter madness. It is so ridiculous, it's hard to put it into words if you've always been hale and hearty. We are being disabled by the very system supposed to enable us.

These cuts dressed up as reforms are based on envy. A belief that those who cannot fend for themselves,  must suffer. Live the life I was living until last month. But that life makes you sicker, it makes you MORE disabled. The money is not going to those most in need, it is going to those wealthy ministers judge to be most in need and the two are so different they cannot be reconciled.

It's a sorry, sorry mess.

All I can think is that the ghosts of disability past, present and future visit Mr Grayling and Mr Duncan-Smith and scare the pricey pants off them. A night of terror, where the scales fall from their eyes and they see clearly why they have got it so wrong.

What else but personal experience could get through to these idealogues? 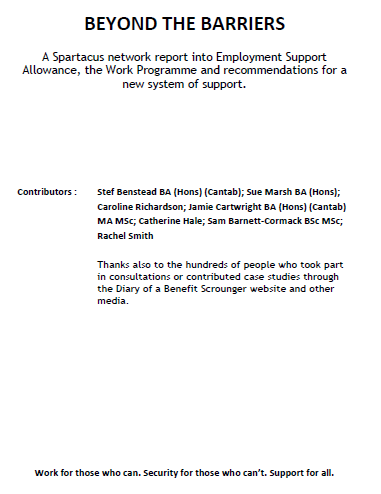